Japan’s rugby players have discovered they can, after all, teach the All Blacks something: how to execute a respectful post-match bow to adoring fans.

Taking their cue from the Rugby World Cup hosts, New Zealand were the first visiting team to line up, face the crowd and lower their heads, after their 23-13 victory over South Africa in front of 64,000 fans in Yokohama last weekend.

In another sign that players are showing a gentler side after bruising encounters on the pitch, organisers reported that several teams had adopted another Japanese sporting tradition – cleaning their own locker rooms.

Some players carried off the bowing gesture – a familiar sight in Japanese sport – better than others, with at least one using the opportunity to rest their hands on weary legs.

The show of appreciation – which in other circumstances can be one of contrition – has burnished the All Blacks’ reputation in Japan, where footage of the moment drew an enthusiastic response on social media.

Italy, Samoa, Namibia, Ireland and Wales are among the teams to have bowed at the end of their matches, win or lose. 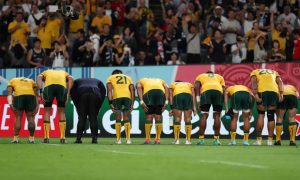 The USA head coach, Gary Gold, said his side would do the same regardless of the result of their second pool match, against England in Kobe on Thursday evening, according to Kyodo news agency.

“From our point of view, that’s Japanese culture and that’s how the game is played here. That’s how the respect is shown to the crowd. We’re going to follow suit,” said Gold, who coached the Kobe Kobelco Steelers in Japan’s Top League during the 2014-2015 season.

The All Blacks captain, Kieran Read, said his team’s bow was an attempt to reciprocate the generous welcome they have received in Japan.

“It’s really important for us to connect as much as we can with the Japanese people, we know that they love us as All Blacks but we need to show a bit of love back to them,” Read told reporters.

“The support’s been fantastic so far, we saw that tonight, there was plenty of fans with the black jerseys, which is fantastic. We want to enjoy this tournament, get out and see as many people as we can and, hopefully, get some new fans.”

Wales will surely have added to their Japanese fan base after bowing at the end of their match at the City of Toyota Stadium on Monday.

Days before the tournament, the Welsh squad were treated to a rendition of Hen Wlad Fy Nhadau [Land Of My Fathers] by 15,000 people who had turned out to watch them train in the south-western city of Kitakyushu.

Although the depth of a bow varies depending on the social setting, players can avoid embarrassment by following a few simple rules: keeping their neck and back straight, eyes down and arms by their side, they should bend at the waist to an angle of around 45 degrees.

At no point should they clasp their hands in front of their lower stomach – a posture seen as the preserve of women.

The tournament’s organising committee said the French team had swept the floor of their locker room after their narrow win over Argentina in Tokyo on Saturday, adding that the Namibian and Italian teams had done the same after they played each other in Osaka the following day.

While Japanese football fans have been tidying up after themselves in stadiums around the world for years, the country’s football team made headlines last year after leaving a spotless locker room following their exit from the World Cup in Russia, along with a “thank you” note in Russian for their hosts.

“Similar to the changing rooms, we’ve noticed that in other world sporting events that the Japanese sport side … will leave the changing room in a very good condition and very clean,” England rugby player Ruaridh McConnochie said, according to Kyodo.

“So we are trying to do the same when we are around stadiums here, especially, but also around other competitions around the world.”