In the end, as ecstatic Japanese rugby fans celebrated their team’s first victory over Ireland on Saturday, it was left to a retired warrior from the losing side to offer a sense of perspective.

“This tournament needed a second-tier nation to beat a first-tier nation and this was no fluke,” said the former Irish wing Shane Horgan. “They thoroughly deserved it, out-played Ireland – all of a sudden, this tournament becomes very, very tricky for Ireland.”

And very, very interesting for the host nation. The Brave Blossoms’ stunning 19-12 win over a side that ranked world number one just a few weeks ago has electrified the Rugby World Cup, with international stars quick to pay tribute on social media.

“What have we just witnessed?” the former Welsh wing Shane Williams asked on Twitter. “One of the performances of the tournament so far!”

In Tokyo, as the final whistle blew some 180km away in Shizuoka, fans drank in the magnitude of their team’s performance, a victory that eclipsed the defeat of Fiji by unfancied Uruguay on Wednesday, another shock result that the game’s supporters hope will attract new converts.

“I didn’t think we stood any chance of winning before the match,” said Kazuyuki Imano, an IT worker who played rugby at high school. “But we’ve won. That’s all that matters.”

Those who recalled the “Brighton miracle”, Japan’s epic victory over South Africa in the last Rugby World Cup, said this weekend’s “Shizuoka shock” surpassed even the heroics of four years ago. Several predicted that the game would reap dividends in Japan, if the team were able to build on their historic victory.

“This is much bigger,” said Takuya Sato, a longtime rugby fan who faced Japan’s winger Kotaro Matsushima as a high school player. “Once the tournament is over, rugby fever might subside a bit. But if Japan reach the quarter-finals, it will be a huge boost for the sport here.”

TV networks flashed the result, while, in bars around Japan’s capital, seasoned rugby fans and recent converts exchanged high fives and hugs, with some cheekily ordering rounds of Guinness to celebrate.

Social media sites were overrun with video clips of the match, with some voicing mixed feelings about the result. Oona McGee, a half-Japanese Australian who lives in Tokyo, tweeted: “Joy and sorrow but what a match! Brilliant play by Japan.” The tournament’s official Japan-language account posted a clip of prop Keita Inagaki in tears after the final whistle.

Japan failed to reach the knockout stages of the last world cup, despite winning three of their four pool games. But victory over Ireland leaves them within reach of the quarter-finals, with Samoa and Scotland standing in their way. 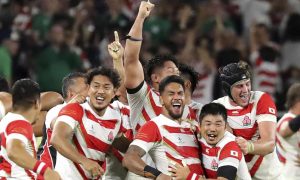 “Japan won because they did the obvious things really well – they just kept running at Ireland right until the end,” said Masaaki Yamashika, who watched the match, appropriately enough, at Craic, an Irish-themed pub. “I think Ireland thought they were going to win this and let their concentration go.”

Qualifying from Pool A would, though, raise the possibility of a quarter-final meeting between Japan and the All Blacks – a prospect many home fans wanted to avoid.

“We’d much rather play South Africa and repeat what we did to them four years ago,” said Naoto Kamikubo in between gulps of beer on a warm evening in Tokyo.

His friend Hidenari Shiromizu said the drama in Shizuoka had truly brought the competition to life for home supporters, just over a week after an error-prone Japan beat Russia in the tournament’s opening fixture.

“I was three years old when the first Rugby World Cup was held,” Shiromizu said. “And now it’s here … and this has happened.”

Most pundits expected Ireland to prevail over Japan, but Japan’s coach, Jamie Joseph, said his side had gone into the match with only victory in mind. “We’re ecstatic about the result,” the New Zealander said. “We’re really proud of the players, we had a plan. We’ve been training for a long time. We’ve been thinking about this game for quite a long time. Obviously, Ireland have been thinking about it for the last six or seven days.”

The Ireland hooker Rory Best, paid tribute to the host nation. “We knew how tough it was going to be. Anyone who is utterly shocked hasn’t seen how good they were. We had a game plan and were prepared, we made a few mistakes and were on the wrong side of the penalty count. But Japan played really well and posed us a lot of questions, unfortunately we couldn’t come up with the right answers.”